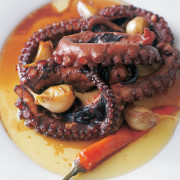 I was initially rather reluctant to include this recipe, but when Cheong Liew cooked it
at the Mildura Writers’ Festival for the guest of honour, Clive James, it occurred to me
that this recipe is a real foodie treat and I should include it.
It is not Italian, really, because Italians prefer to boil the octopus, slice it thinly and
then dress it with olive oil and lemon juice. However, its intentions are deeply
Mediterranean.
Three ingredients are important here: the octopus, the garlic and the olive oil. Some
attention to detail is needed in the cooking, but not overwhelmingly so. Served as an
antipasto, you only need small portions.